skip to main | skip to sidebar

I don’t understand why people who reported the truth are being captured, while those who caused the trouble isn’t!

I don’t understand why people who were randomly accussed are being arrested, while others aren’t!

I don’t understand what is happening anymore!

If you’ve been following Malaysian politics, you should know what I’m talking about.

I don’t even know whether should I say “God Bless”

Hell yeah it’s time to update. I don’t know where to start!
Posted by Sham Radio at 11:41 pm No comments:

So I started my preceptorship at the Bukit Batok NHG Polyclinic.

Preceptor is defined as an identified experienced practitioner who provides transitional role support and learning experiences within a collegial relationship for a specific time, while continuing to perform some or all of the other responsibilities of their position.

I’ll be attach to the Pharmacy for 6 weeks, fulfilling the Republic’s requirements prior to obtaining a license to practice. Workload has been pretty hectic, working six days a week, with minimal allowance and non-existing welfare benefits.

I will load some pictures and blog about interesting events during my attachment.

I feel a bit annoyed that many people do not know the exact roles and responsibilities of a Pharmacist, what’s with the recent reply on YB Lim’s Blog. In addition, I have also been enlightening friends and acquaintances of mine on what we really do when I tell them about my attachment.

During one of the counselling sessions I sat in with the Pharmacist, the patient actually thanked us after the session by saying “Thank you ah, Doctor”

My mentor quickly replied the patient by saying “I’m not a Doctor, I’m a Pharmacist”

I feel that there is a need to ‘publicize’ the pharmacist among Pharmacy students and registered Pharmacists alike. Many a times, I get questions like “So this degree will just allow you to give them the medications? How hard can that be?” or even “Doesn’t it bother you that you know you’ll never be on top in the healthcare scene, since Doctors are the most likely ones to be the final decision makers”

It’ll be quite hard for patients to see what we really do, since we work behind the counter most of the time. And since we’re the final personnel they see upon collecting their medication, they’ll probably channel all their perceptions and frustrations to us as ‘being the bad ones’. There was one patient, with sore throat, runny nose and fever (typical symptoms of the common cold aka flu by the way) insisted that there was a mistake on the Pharmacy side for not giving her antibiotics, although it was the doctor who decided not to prescribe her with them.

The other problem is of course we can’t go around putting big signs saying “Look at me! I’m a Pharmacist” as the law only allows us to put one mini sign showing our name and our title e.g. Aaron J Lam, RPh, BSc. (Hons?) Pharmacy.

FYI: Just because you have sore throat and everything doesn’t mean that you need to undergo antibiotic therapy. Antibiotics are only given if you’re diagnosed with an infection from bacterial origin. Viral infection will warrant antibiotics useless.

The Media Is At Stake

When Raja Petra Kamarudin (or known as RPK) was arrested for his article on the Malaysia-Today website, I thought I checked out the website on what it was all about.

I got hooked onto the website since. If you value freedom of speech, and freedom of the media. Then support RPK by donating for his bail. The family is requesting $1 per person/blogger. I donated $10.

updates 16:16 - Account statement made by RPK’s wife on the donation as at 4pm today

Would you look at the sum! And it’s only today the fund was started! Looks like I’m not the only one who thinks this way =)

Just got invited to participate in the “Universitas 21 (U21) Undergraduate Research Conference” from my recent research on “Complementary and Alternative Usage among Breast Cancer Patients in Singapore”.

Will update you guys again on WHAT THE HECK IS U21! I don’t even know currently as it was my Professor who submitted my name =p

But in any case, I’m awaiting for “Good luck” and “Congratulations” on my comments yeah *boasts* 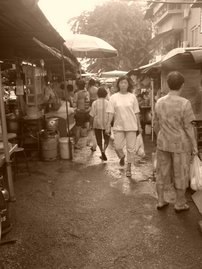